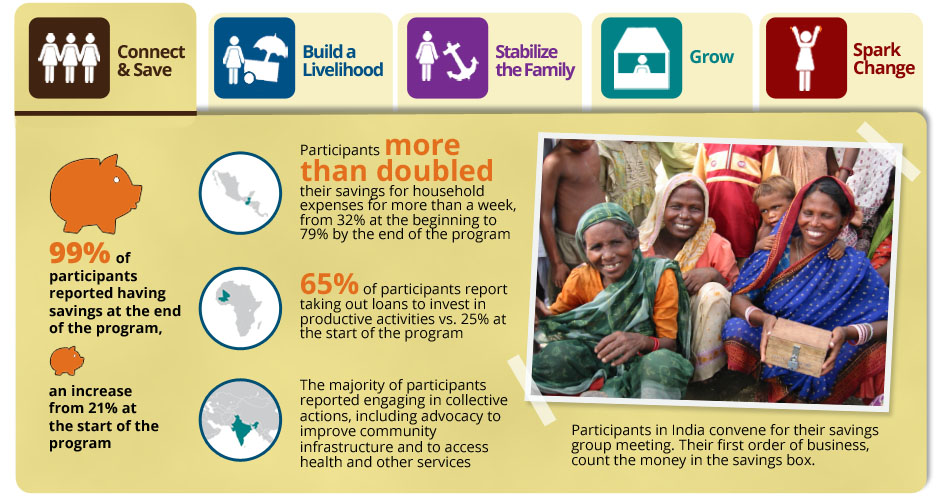 When women in India, Mali and Guatemala come together in a savings group circle, they build savings, grow their businesses, gain confidence and work in solidarity with one another. Together, in their circles, these women begin to reap the rewards of hard work. Soon, they are improving the lives of their families by giving birth to their newborns in hospitals, sending their children to school for the first time and ensuring their families have enough food to eat.

You know you’ve reached Trickle Up country when the road has ended and you have to walk at least a quarter mile to reach the village. The village of Pinou is a two-hour drive west of Ougadougou, the capital of Burkina Faso, and we were definitely in Trickle Up country. Pinou is one of the poorest villages in one of the poorest nations in the world. Our journey began on paved highway, switched to a well-traveled dirt road, and then, beyond the small town of Koudougou, there was only a bumpy, rutted 2 mile path through the brush. We didn’t enter Pinou on foot, but probably should have.

When we arrived at Pinou, we were greeted by 25 women who are Trickle Up participants, all singing, clapping, and dancing in traditional African welcome. Three male drummers, with round traditional drums, known as Bendrés, kept the beat. Surrounding the women was another large group of women who joined in the song, punctuating it with an occasional high-pitched “lo, lo lo.” Their song called out, “We welcome you, we’re happy to welcome you. Come in, have a drink of water, make yourself comfortable, and, when you’re done drinking, we’ll catch up.” Continuing their song and dance, the women led us to the central clearing in their village.
The Trickle Up group had named itself Rel Wendé, or “Leaning on God.” Formed two years earlier, it consisted of 25 women who were among the poorest in the village. With business training provided by our local partner AIDAS and Trickle Up seed capital grants of about $125, each woman had begun a small enterprise to add to her family’s income and assets. Several made and sold soumbla, a flavorful African bouillon, and spices made from various grains. One woman fried bean cakes called samsa to sell, another sold peanuts, and two had started small restaurants. Several women brewed a local beer called dolo, and others grew millet sprouts that are used to make dolo.
To qualify for the mill program, the women had to formally register their group with the government. They also had to put up 300,000 West African francs (about $600) in order to leverage a government grant of 5 million francs ($10,000). Since 300,000 francs was all they had in their savings fund, they were unsure if they should risk it all and so they went to AIDAS, Trickle Up’s local partner agency, for advice. They also consulted with the village chief, who encouraged them to do it and offered to provide 1,000 bricks to help construct the mill building. The women each contributed 25 bricks of their own and persuaded others in the village to contribute lumber for the building and cement for the floor.

The Multifunction Platform opened for business in May 2011. Women from the Trickle Up group take turns operating the mill. They don brown work jackets and hairnets, with one woman monitoring the main engine and another the milling component, where villagers pour grain into the funnel on the top and then collect the milled grain in buckets or burlap bags at the bottom. Profits from the mill go back to the Rel Wendé savings-and-loan fund, which is now able to also make loans to another group of women, who, on their own, are establishing their own savings group.


Guatemala is a beautiful country. Its many mountains and hills take you through windy roads to beautiful vistas reminiscent of fantasy novels, while 19 different microclimates, including hot deserts, steamy tropical forests, and wet rainforests, ensure ever-changing scenery. So, it was a wonder when my colleague on this recent trip to Guatemala described the country as one where the “social fabric” was “ripped to shreds.”

There is certainly some truth behind this statement. Guatemala is a country with a dark past: thirty-six years of civil war ending relatively recently in 1996. This was a drawn-out war during the height of the leftist, communist scare of the Americas. The government of Guatemala ran a terror campaign against poor, rural communities, mainly indigenous peoples, whom they believed were supporting the rebel groups. Some attribute the military’s actions as genocide. Indeed, the destruction of entire communities and villages resulted in some 200,000 killed and 40,000 to 50,000 missing.

To add further complexity to this tragedy, these affected communities are also home to some of the poorest and most vulnerable people of the country—those who live in the conditions of ultrapoverty. The ultrapoor, a subset of the extreme poor—those who live on $1.25 a day and less—are characterized by chronic food insecurity and poor health, insufficient and irregular income, minimal productive assets with high vulnerability to shocks, and the need to prioritize consumption over investment. They have been historically excluded by their own government and NGO programs. The ultrapoor tend to be disproportionately women, indigenous, rural, and people with disabilities.

So, it was fascinating to me to see it was those who live in these dire conditions as the ones who were doing so much to rebuild—or, more specifically, re-weave—their communities.
Now, they are a tight-knit group that has developed a rigorous set of rules to work together and continue to move out of poverty. For example, potential new members are investigated and not admitted if they are found to have bad credit or outstanding debt. Even then, the group does not extend credit to new members until they have been members in good standing for at least six months. Furthermore, they support one another and their communities, last year using their social fund to support a neighboring village that was affected in a landslide. And finally, they have positioned themselves as an important part of their local community: Meeting times and other information about the group are broadcast over local radio, they have been given access to the main municipal building in the city of Tamahu to hold their meetings, and the assistant mayor and several other members of local government were present when we visited.